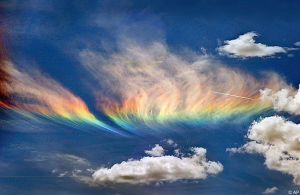 On December 8, 1854, Pius IX solemnly promulgated in the Basilica of St. Peter the Dogma of the Immaculate Conception.  Already advanced in years and of delicate health, he was in the presbytery and was speaking in a weak voice.  At that time microphones, loudspeakers, and sound amplifiers had not yet been invented. But in the moment when he read the formula of the dogmatic definition, his voice became sonorous and strong while at the same time a ray of sun, piercing the clouds, passed through a stained-glass window of the Basilica of St. Peter’s, enveloping his person.

Those external events, that everyone noticed, were interpreted as a sign of God’s pleasure and also that of the Blessed Virgin Mary.  The Pope said, “That which I experienced, that which I felt defining the Dogma of the Immaculate Conception, was such a thing that I would not know how to express it in human language. While God pronounced the words of the Dogma through the mouth of his Vicar, he made such a clear and intense light about the incomparable purity of the Most Pure Virgin enter into my spirit that, sinking into the abyss of this knowledge, my soul felt inundated with unutterable delights, of delights that are not earthly and which one cannot experience but in heaven.”

A biographer of Pius IX writes, “I am not afraid to affirm that the Pope received a special grace not to die of sweetness under the impression of the knowledge and of the feeling of incomparable beauty of the Immaculate Mary.” The words with which the Pope defined the Dogma of the Immaculate Conception of the Blessed Virgin Mary, that were accompanied by that profound mystical experience, were these:

“With the authority of our Lord Jesus Christ, of the Blessed Apostles Peter and Paul, and with our own, we declare, pronounce and define:  The doctrine that maintains that the Most Blessed Virgin Mary at the first moment of her Conception, by a singular grace and privilege of God Almighty, in view of the merits of Jesus Christ, savior of the human race, was preserved exempt from every stain of original sin, is revealed by God and therefore should be believed firmly and inviolably by all the faithful” (Pius IX, Bull Ineffabilis Deus) as quoted in the book, The Virgin Mary and the Devil in Exorcisms by Father Francesco Bamonte

Bishop Joseph E. Strickland was named the fourth bishop of Tyler in September of 2012 by Pope Benedict XVI. Prior to being named bishop, he served a number of roles in the diocese, including vicar general, judicial vicar, and pastor of the Cathedral parish. He was ordained to the priesthood in 1985.
Prev:  A Note to the Flock
Next: Hope and Light in the Darkness