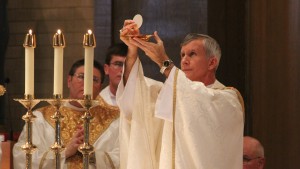 Eucharistic Faith from 1000 years ago

I mentioned this passage during my homily at the Priestly Ordination of Father Nick Napier, Father David Bailey, Father Albert Jerome Mott and Father Michael Ledesma on Saturday, May 29, 2021.  I also want to share it with all of you. I encouraged these fine new priests, along with all of their new priestly brothers at the ordination, to make the Eucharistic Altar of Jesus Christ the heart of their priesthood.  Let us pray for these men that from this heart will flow all of their good works, ministry, and care for the Body of Christ which is the Church they serve.

This passage is striking because it predates the more developed theology of St. Thomas Aquinas but it speaks of the same wondrous truth of the real presence of Jesus Christ, Body and Blood, Soul and Divinity present in the Eucharist.

“We believe that the earthly substances on the altar of the Lord, placed there for divine consecration by the priestly ministry, are ineffably, incomprehensibly, and wonderfully overturned by a heavenly power, and converted into the essence of the Body of the Lord, preserving the appearance and qualities of the species so as not to be perceived in a crude or bloody manner, which might terrify. One, rather, recognizes an increase in the reward of faith for him who believes: This is the very Body of the Lord who resides in heaven at the right hand of the Father, immortal, inviolate, entire, impeccable, and impassible. Thus, it may truly be said that we receive the very same Body, born of the Virgin, and yet it is not the same: It is indeed the same in essence, nature, and virtue. It is not in the sense that one sees the species of bread and wine while recognizing the higher gift (the Body and Blood). This is the faith that was held in ancient times and is now held by the Church, and has spread throughout the entire world by those of the Catholic name.”

It is remarkable that Blessed Lanfranc speaks of “the faith that was held in ancient times” as he writes near the year 1000. We find ourselves almost 1000 years further down the path of history and can say this faith is even more ancient. We must rekindle this kind of faith still “held by the Church” but rejected by too many as incomprehensible or somehow overstated. I believe the Eucharistic controversies that swirl in our time are rooted in a lack of deep faith in the real presence. If we truly believe that the Lord of the Universe, Jesus Christ the Divine Son of God becomes our food and drink in the Eucharist, then no politician, no businessman, no leader of any sort will dare to deny basic teachings of the Catholic faith and at the same time approach the Eucharistic altar at Communion.

Let us turn to St. Joseph the Patron of the Universal Church and his spouse the Immaculate Virgin Mary to intercede for us powerfully that people of faith may return once again return to deep faith in the Real Presence of the Son of God whom they nurtured in this world.

Bishop Joseph E. Strickland was named the fourth bishop of Tyler in September of 2012 by Pope Benedict XVI. Prior to being named bishop, he served a number of roles in the diocese, including vicar general, judicial vicar, and pastor of the Cathedral parish. He was ordained to the priesthood in 1985.
Prev:  Men's March in Washington, D.C. on June 12
Next: A Call to Pray to Saint Michael the Archangel